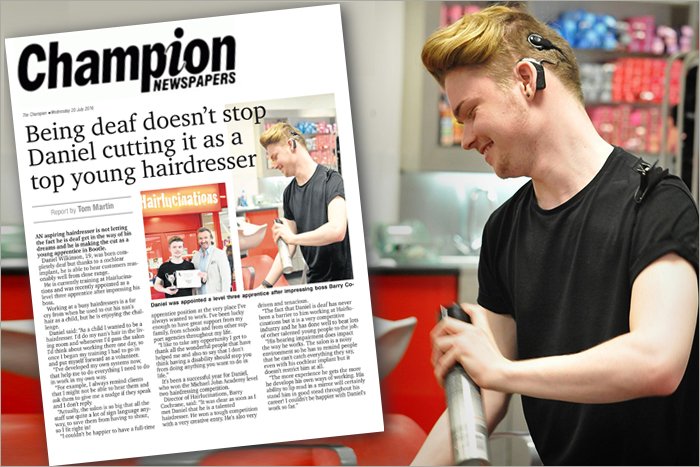 AN aspiring hairdresser is not letting the fact he is deaf get in the way of his dreams and he is making the cut as a young apprentice in Bootle. Daniel Wilkinson, 19, was born completely deaf but thanks to a cochlear implant, he is able to hear customers reasonably well from close range. He is currently training at Hairlucinations and was recently appointed as a level three apprentice after impressing his boss. Working at a busy hairdressers is a far cry from when he used to cut his nan’s hair as a child, but he is enjoying the challenge.

Daniel said: “As a child I wanted to be a hairdresser. I’d do my nan’s hair in the living room and whenever I’d pass the salon I’d think about working there one day, so once I began my training I had to go in and put myself forward as a volunteer.”

“I’ve developed my own systems now, that help me to do everything I need to do in work in my own way. For example, I always remind clients that I might not be able to hear them and ask them to give me a nudge if they speak and I don’t reply.”

“Actually, the salon is so big that all the staff use quite a lot of sign language anyway, to save them from having to shout, so I fit right in! I couldn’t be happier to have a full-time apprentice position at the very place I’ve always wanted to work. I’ve been lucky enough to have great support from my family, from schools and from other support agencies throughout my life. I like to take any opportunity I get to thank all the wonderful people that have helped me and also to say that I don’t think having a disability should stop you from doing anything you want to do in life.”

Director of Hairlucinations, Barry Cochrane, said:
“It was clear as soon as I met Daniel that he is a talented hairdresser. He won a tough competition with a very creative entry. He’s also very driven and tenacious. The fact that Daniel is deaf has never been a barrier to him working at Hairlucinations but it is a very competitive industry and he has done well to beat lots of other talented young people to the job. His hearing impairment does impact the way he works.”

“The salon is a noisy environment so he has to remind people that he can’t catch everything they say, even with his cochlear implant but it doesn’t restrict him at all. The more experience he gets the more he develops his own ways of working. His ability to lip read in a mirror will certainly stand him in good stead throughout his career! I couldn’t be happier with Daniel’s work so far.”