Hairlucinations is a winner in the National Apprenticeship Awards 2017 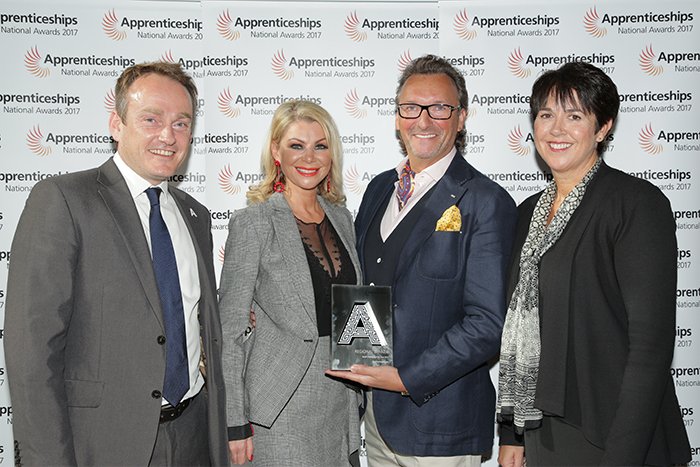 THE awards took place at the prestigious and spectacular Titanic Hotel, situated at the Stanley Dock, part of Liverpool’s World Heritage site. Hairlucinations was one of the winners at the North West Regional final of the National Apprenticeship Awards 2017 and was announced the winner of the small employees category 1 to 24.

The awards, now in their 14th year, are run by the National Apprenticeship Service and recognise excellence in 2 areas:

On being announced as winner, Barry Cochrane MD said:
“Hairlucinations is one of the longest standing tenants in the New Strand Shopping Centre near Liverpool City Centre, having opened our doors in the early 1970’s. As a local salon with a team of talented and enthusiastic stylist we are, and always have been, totally committed to taking apprentices through our doors. I have team members that have been with me for over 25 years who themselves went through the process of joining our ranks as an apprentice at Hairlucinations. This I find helps us to integrate each intake of new apprentices as we have working examples of those that know what it takes to go to the next level of hairdressing. Winning The 2017 National Apprenticeship Awards Area Final has meant recognition after 48 years of creating world class hairdressers within our region. This puts us alongside the biggest apprenticeship providers in the country. We offer careers not jobs and this proves even small businesses can deliver award winning training.”

Hairlucinations won the award in recognition of the contribution to producing continuous outstanding support and training for all of the apprentices they employ. This in conjunction with Micheal John Training Academy Liverpool has been a winning formula for many years.